Oliver's Teapot is a Limited Edition questline which is part of the Silver Teapot Event. It started February, 2012 and ended on March 12th, 2012. It was then re-released on April 4th, 2012 without the term limited and should be available for all players that reach Level 5

"Who should own the antique Silver Teapot? Is it rightfully mine? I need a Guardian's help! Play the OLIVER'S TEAPOT quests to unlock new scenes! Complete all 4 Acts and earn a GARDEN PARTY TEA SET for your estate!" 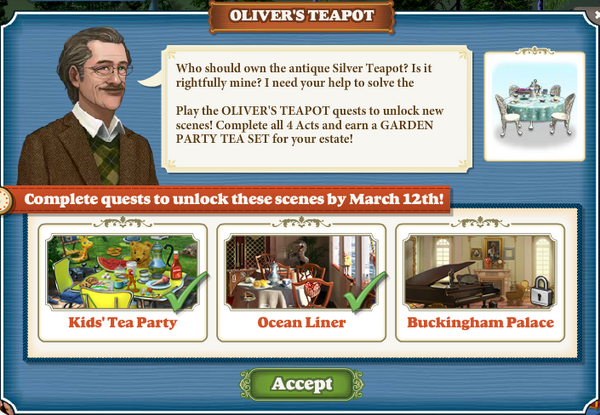 Rewards for completing all:

Quest To Tea or Not To Tea-Intro 1

Quest To Tea or Not To Tea-Intro 2

Quest To Tea or Not To Tea-Intro 3
Add a photo to this gallery
Retrieved from "https://hiddenchronicles.fandom.com/wiki/Oliver%27s_Teapot_Questline?oldid=20620"
Community content is available under CC-BY-SA unless otherwise noted.