Year of the Dragon was a Limited Edition Questline which was part of the Chinese New Year Event. It started on January 26th, 2012 and ended on February 05th, 2012. After the Event ended it will be no longer available for the players.

"Help me unravel the mystery of the Imperial Dragon: Play the Year of the Dragon quests to unlock new scenes. Complete the 8 quests to earn the IMPERIAL DRAGON for your estate!"

Rewards for completing all 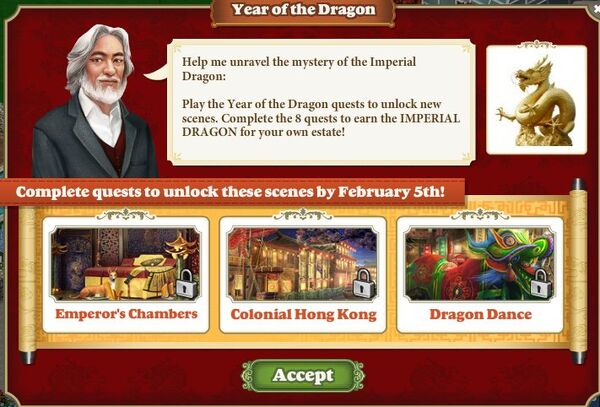 Year of the Dragon Quests

Retrieved from "https://hiddenchronicles.fandom.com/wiki/Year_of_the_Dragon_Questline?oldid=21493"
Community content is available under CC-BY-SA unless otherwise noted.